On our week long trip in Tuscany, we could only devote one day to the city of Florence. I wish we could have spent more time in Florence, but with only one day here’s what we were able to fit in.

We boarded the 8:00 train from our home base in Montecatini to arrive in Florence around 9am. We headed straight to the Duomo (cathedral) ticket office in the hopes that we could get tickets to climb to the cupola in the Santa Maria dei Fiore or the Florence Cathedral. Sadly these tickets can’t be booked in advance and the earliest time slot we could get was for two days later!

The thing that made our one day trip worthwhile was buying the Firenze card. The card costs 72 euros, gets you into 72 different Florence attractions and is good for 72 hours. While we were only in the city for 12 hours, the card allows you to skip the long lines waiting to buy tickets. Even just at our first stop, the Galleria dell’ Academia, the Firenze pass saved us 2.5 hours of standing in line to buy tickets!

As mentioned, our first destination was the Galleria dell’ Academia. If you chose to forgo the Firenze pass, you can avoid the lines at the Galleria dell’ Academia and buy the tickets online ahead of time here. Most associate the Galleria dell’Academia as the home of Michelangelo’s David. Originally placed in front of the Palazzo Vecchio, which we visit later, the sculpture was brought to the Galleria in 1873 after this hall, the Tribune of the Galleria, was built specifically for it. Other exhibits include: the Gipsoteca Bartolini, where you can see 19th century plaster models of larger works by Lorenzo Bartolini to see the artisitic process; the Museum of Musical Instruments, housing an instruments highlighting music’s role in Florence’s history; and the hall of Florentine Gothic paintings dating back to the 13th and 14th centuries. You could easily spent most of your day here! 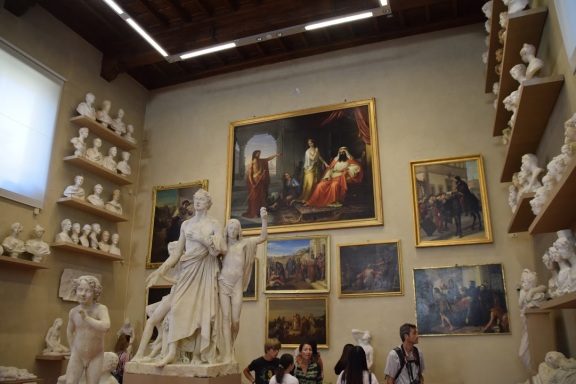 Our next stop was the Basilica de San Lorenzo, the parish church of the powerful Medici family. The church was rebuilt in 1419 by Filippo Brunelleschi (the same architect who built the dome on the Duomo) under the patronage of Giovanni de Medici. Beneath the church lies the Medici family crypt and treasure room. One surprising addition to the Medici family crypt is the tomb of Renaissance artist Donatello. Donatello was a close family friend of the Medici family, close enough to join the family in the afterlife. 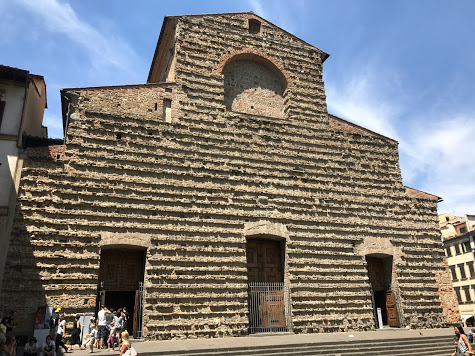 After the Basilica de San Lorenzo we made our way to the Palazzo Vecchio, or “Old Palace”. The Palazzo Vecchio was the meeting place of the governing council of Florence known as the Signoria. The Palazzo Vecchio also eventually become the home of the Medici family and is so vast it wouldn’t be difficult to spend hours wandering the various living areas. Visitors are also allowed to climb its tower for views of the city. There was a line when we were there, you can spend as much time up there exploring as you want but only a limited number of people can go up at a time. 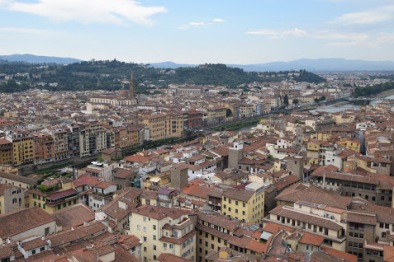 After that whirlwind morning we headed in the general direction of the Arno river. Along the way we stumbled upon the Mercato del Porcellino, a 16th century covered market. While it was originally a luxury goods market, today it was filled with street vendors selling apparel. After a quick browse we headed to Fratellini’s, a sandwich shop recommended by a friend who had studied abroad in Florence. The sandwiches were delicious, a quick and easy stop to rejuvenate for the rest of our day!

Next we walked along the banks of the Arno river to Ponte Vecchio, or “Old Bridge”. The current bridge was built in 1345 after flooding swept the older version away but a bridge in this location can be documented back to 966! While the bridge has had shops on its edges since the 13th century, today the bridge is lined specifically with jewelry shops. This stems from a 1593 decree by Ferdinand I, Duke of Tuscany, that only goldsmiths and jewelers could sell on the bridge.

We headed back towards the Piazza del Duomo with the intention of visiting the Duomo first. Unfortunately, we thought that the closing time for the duomo was the same as the Baptistery, 7pm. However the Duomo closes earlier than everything else on the square at 5pm. Learn from our mistakes and check closing times carefully!

While we couldn’t visit the Duomo interior, we were able to go inside the Baptistery next door where every child in Florence was baptised between the 13th and 14th century. The famous Baptistery doors were commissioned following an outbreak of disease in 1401 as a thank you to God for sparring the city of another Black Death plague which had killed 4/5th of the Florence population about 50 years prior. The bronze doors created by Lorenzo Ghiberti are considered by some the first great Renaissance work of art. 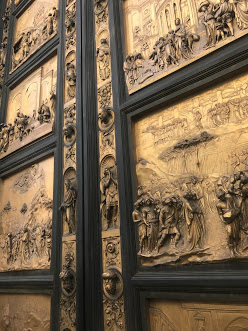 To round out our day in Florence we decided to climb the bell tower connected to the Duomo. With 414 steps up narrow staircases, the climb is not for the faint of heart, but don’t worry, there are different levels where you can stop and catch your breath, or stretch like we did! At the top there are great views of the city and a great alternative if you can’t climb up into the Cathedral’s dome. 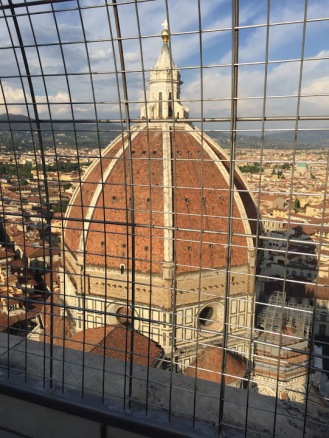 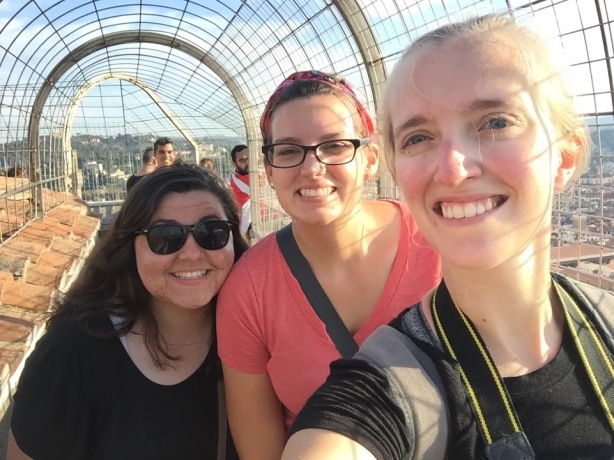 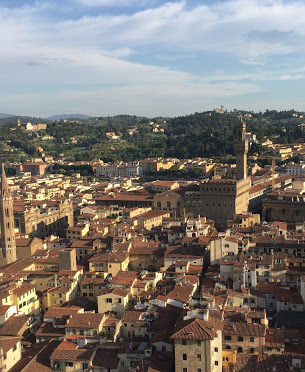 After the climb it was time to head to the train station to catch our train back to Montecatini. Unfortunately, we missed the train by about 20 seconds… but that meant we had time to get gelato before the next train left 30 minutes later! While we were able to fit most of what we wanted into our one day in Florence, we planned out our routes and the priorities of places we wanted to visit the night before. If you have a limited amount of time be sure to map out your day ahead of time too, there aren’t buses that go through the historic areas so be prepared to walk! 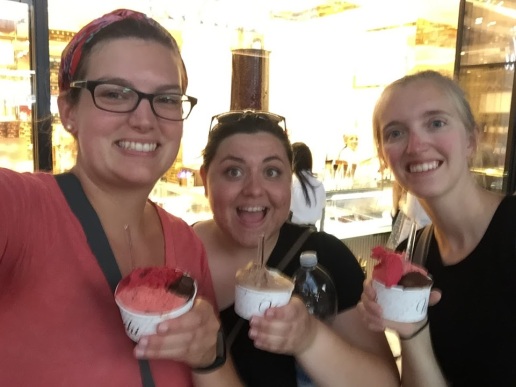