Our week-long trip around Tuscany would not be complete without a visit to Florence, the capital of the region. The Florence Cathedral, or the Duomo, is hard to miss as its dome towers over the city’s skyline. We learned a lot as we explored the city, but most of what I learned about Florence came from the non-fiction book Brunelleschi’s Dome by Ross King. Here are the 10 things I found most interesting about the Florence Cathedral:

1) Each year, the architects and wardens working on the cathedral had to visit the original model by architect Neri di Fioravanti and swear an oath, with their hand on the Bible, that they would make it make it exactly like the model.

2) The foundation stone for the cathedral was laid in 1296, but only the foundation was completed before the Black Death plague killed almost 4/5ths of the population of Florence and construction came to a halt for a few years.

3) Neri’s model contained a dome with a span of 45 meters (148 ft)  larger than had been constructed since the Pantheon in Rome but with no visible supports. 50 years after construction began on the Cathedral builders still didn’t have a plan for how to build the dome. The city of Florence held a contest in 1418 with a prize of 200 gold florins (more than a skilled craftsman could earn in 2 years) for designs for the main dome and a method for vaulting it.

4) 12 people entered the contest with ideas on how to build the dome, and while Filippo Brunelleschi’s innovative design would eventually be used, he was never actually announced as the winner of the contest or given the prize money.

5) With the help of Filippo Brunelleschi’s innovative tools including a revolutionary ox hoist, the dome only took 16 years to complete, while the cathedral itself took 140 years to complete.

6) Every inch of the exterior of the Duomo is covered in marble, the only exception being the tiled bricks in the dome.

7) Besides his architectural feats, Filippo Brunelleshi is also considered the inventor of perspective painting or representing objects in 3D rather than 2D. The ancient Greeks and Romans used the technique but the mathematical laws associated with them were lost.

8) A wider vault was not constructed until the 20th century and only with the use of modern materials. For perspective, the dome of the United States Capital Building is only 95ft wide, less than 2/3rds the size of Brunelleschi’s dome.

9) Cars are not permitted near the Florence Cathedral as traffic was not taken into account in the cathedral’s construction. Today only garbage trucks are permitted through the Piazza del Duomo.

10) Michelangelo’s David, displayed in the Galleria dell’Accademia, is carved from a leftover block of marble that was abandoned in the Cathedral’s courtyard. In 1501, Michelangelo obtained permission from the Opera del Duomo to use the marble to create the sculpture.

As you can see, if you’ve read this far, there is so much history surrounding the Florence Cathedral, read more about what we learned on our one day in Florence here! 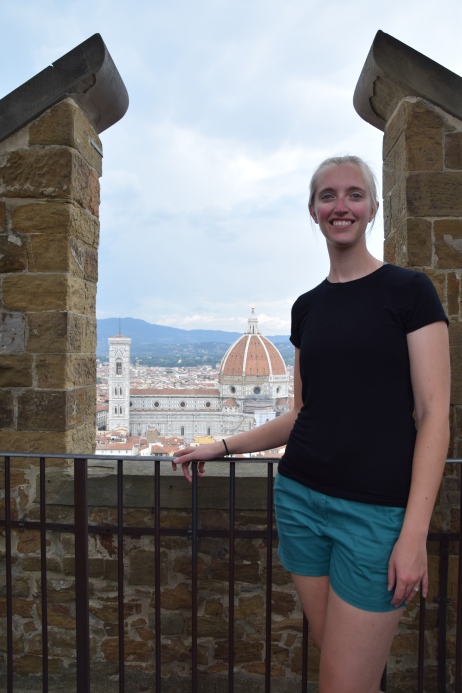