At our first day in Kim’s school, we were surprised when we arrived to find that it was a “working day.” That means that instead of classes, the students work to clean up the school’s campus. They hadn’t started cleaning yet, so we decided to still do our prepared activity with the students who were there early before they started cleaning. Since my mom and I are both engineers, we wanted to bring some math and science activities to do with Kim’s students. After introducing ourselves and talking a little bit about all the different types of engineering, we jumped right into an activity all about estimating.

We started the lesson with a few vocab words so the students would have some notes to write down in their copybooks (notebooks). We gave definitions for the words volume, guess and estimate. The idea of the lesson was to show the difference between a guess with very little information and using more information to make an estimate. We displayed a clear 5in x 3in x 1in container which was filled with beans we bought from the shop in front of Kim’s house. We asked each student to write down their guess for how many beans were in the container just by looking at it. 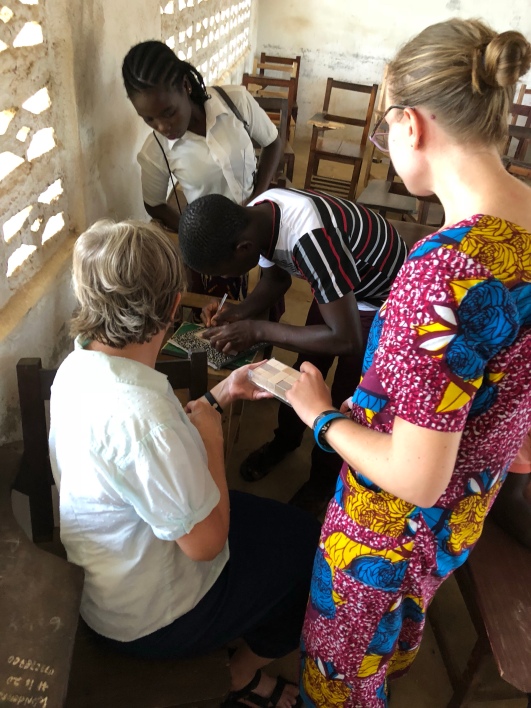 Next we showed them an identical container filled with one inch cubes and had a volunteer from the class count and tell us that 15 one inch cubes fit into our container. After that, we showed them smaller containers that could each fit one cube inside. To help them make a better estimate we poured beans into these smaller cubes then gave groups of students their own set of beans to count.

Knowing the number of beans that could fit in the one inch cubes, we asked the class how they could make a better educated guess or estimate of how many beans could fit in the larger container. Many students answered right away that they could do 15 times the number of beans! With their new number and the idea that the beans can vary in size, we asked each student to write down their new estimates to see who could get closest to the actual number.

After everyone’s estimations were turned in we revealed that the grand total in the large container was 1358! The students who had the closest estimates received a few jolly ranchers we brought with us from the US as their prize. Overall the activity was a hit, the kids enjoyed doing the hands on activity (and getting out of a little cleaning)!

To round out our day we decided to visit a cook shop down the road from the school. Cook shops look a lot like any other house on the street. Locals can spot them because they have a clothe hanging in the doorway as a door but an easier way to spot them is some hang a sign out front that says “Food is Ready”. The way it works is the Ma cooks a bunch of soup and rice for the day then puts her sign out and sells a soup and rice mixed together until she runs out of food for the day. We asked for the soup and rice to be separate since Liberians really love their peppeh aka a hot pepper that they put in a lot of their foods. I don’t handle spicy foods well so I had bites of mostly rice with a small bit of soup. We sat on benches inside the small shop enjoying the traditional Liberian dish! 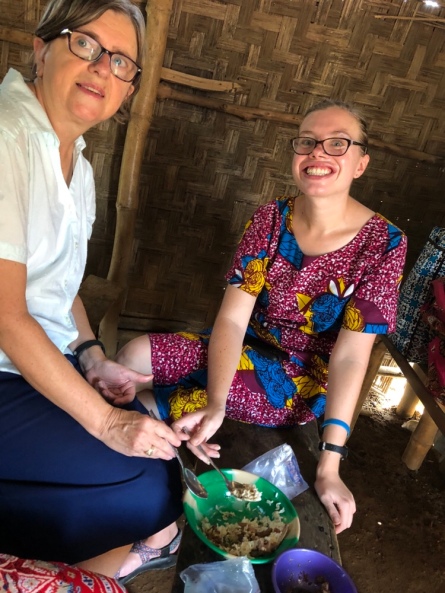