It’s been a month and a half since my last post from Liberia so it’s time for an update! Here’s what’s been going on this holiday season…

In Liberia, they have Thanksgiving but they celebrate it the first week of November instead of the last week. Here though, the holiday has nothing to do with pilgrims or Native Americans, it is a day to be thankful for your family and friends and everything you have in your life. They don’t have the same tradition of a big thanksgiving dinner here, in fact besides having the day off of school, it felt like any other day.

On America’s Thanksgiving day, my school cancelled classes to have their traditional Old vs New Students day. It was a complete coincidence that it fell on Thanksgiving, but a nice distraction from thinking about the celebration I was missing at home! Though my school has grades 1 to 12, it is the only government high school in the area so many students begin in the 10th grade after finishing middle school at a different school—enough that the students who’ve just come to the school this year can make up the New students team that plays against a team of returning students.

The day began with a drama (somewhere between a long skit and short play) put on by the 10th graders and then the competitions began. First was quizzing, where the two teams competed to answer trivia questions on different topics from math to geography to current events! Then we went outside for the sports games: boys’ volleyball, girls’ kickball and the grand finale was boys’ football (soccer). I joined in for a little bit of volleyball, recruited by the new students team since I’m a new teacher. It was a fun day, getting to spend time with my students outside of the classroom setting!

Even though I didn’t celebrate on Thanksgiving Day, I still got my Thanksgiving dinner the weekend after! A group of us Peace Corps volunteers living nearby all got together for thanksgiving dinner in Kakata (the city where we had pre-service training) on the Friday night after. We had some traditional thanksgiving staples: fried chicken (no turkey here), mashed potatoes, corn, garlic bread, pumpkin pie and apple pie turnovers; as well as some local additions: watermelon, papaya (or paw paw as they say here!) and pineapple. It was delicious! And fun to get together with other volunteers…it was an exciting weekend for us in my group because the first 3 months we weren’t allowed to leave our sites for more than just a day trip, so we had just been at site long enough that could stay overnight in Kakata! 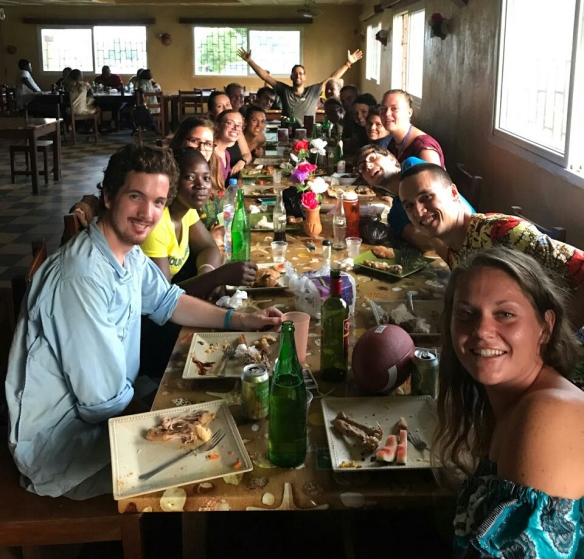 The next morning, we took a day trip to Harbel where the new Farmington Hotel had just recently opened across from the airport. It’s a very nice hotel and the draw for us is the restaurant and the swimming pool. As long as we bought lunch while we were there, they let us swim for free. So we spent the day relaxing at the pool and eating foods that we can’t get at site—I went for the pizza! At the end of the afternoon I went back to my site, it was a fun Thanksgiving weekend!

Then we had the last couple of weeks of the second marking period at school. After testing week, I went back to Kakata for LR-7 reconnect training. Everyone in the group that arrived in Liberia this past June was back together at Doe Palace for a week of additional training. We talked about how things are going at our sites, our successes and challenges, both in and out of the classroom. We also had sessions about different projects we can get involved in like malaria, gender, literacy and grant writing. Besides being in sessions, reconnect was a great time to catch up with everyone! I hadn’t seen most of the group since we’d left for our sites in August. I also was able to visit my host family that I’d stayed with during PST!

After Reconnect training, I headed back to site for one last week of school before Christmas break started. It was a quiet week at school, many students (and even several teachers) chose to start their breaks early so by the end of the week my classes were pretty small.

For Christmas, I had planned to celebrate Christmas day in my community before heading to the airport to fly to Brussels on the 26th for a week. But just a couple weeks before, it was announced that Liberia’s presidential election runoff vote would be on the 26th. Not wanting to be traveling around during the election, I ended up flying out on Christmas Eve instead. My mom and sister met me there a couple days later for a fun week! More to come about our trip but the highlights include day trips to Bruges and Ghent, exploring Brussels and Belgian waffle and chocolate making workshops!

Now I’m back in Liberia and back to school, getting back into the swing of things here!