While we were in Washington DC over 4th of July weekend, we took a break from museums for a day to see a few other places – we visited the U.S. Capitol building, stopped by the Library of Congress and took a tour of the Bureau of Engraving.

We started by touring the U.S. Capitol building in the morning. A few months before our trip we had reached out to the office of our congressman to schedule our tour – and I would definitely recommend doing the same! Instead of waiting in line at the visitor’s entrance we met our tour guide, a summer intern, at our congressman’s office and took a tunnel from an adjacent building right inside to begin our tour. We began in the exhibit hall where there are displays about the history of the building, a model of the dome, and a true-to-life replica of the Statue of Freedom (the statue on top of the dome). 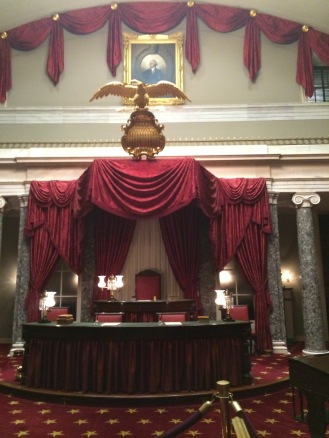 From the exhibit hall, we went up to the ground floor, aka the Crypt – a creepy name but there’s no one actually buried there. It got its nickname because George Washington was originally supposed to be buried right in the center of the capitol building. The Crypt separates the two sides of the Capitol building, one for the Senate and the other for the House of Representatives. Next we went up stairs to the rotunda. Unfortunately it was under construction, but as our tour guide put it, it was a once-in-a-lifetime opportunity to see the rotunda with scaffolding all around it!

After our tour, we stopped in the Library of Congress (taking another tunnel to get there!). It was beautiful! We walked through the Great Hall and then got to take a peek into the Main Reading Room from an overlook balcony. 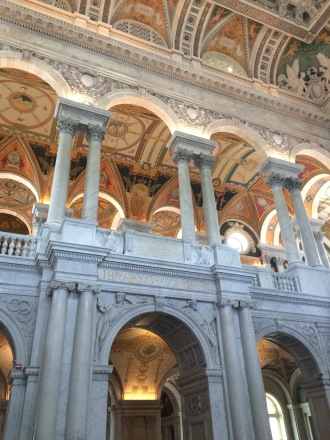 Then we stopped for lunch before heading to our tour at the Bureau of Engraving and Printing – where they print billions of American dollars each year! To go on a tour, you can’t schedule it beforehand, you have to go to the ticket office in the morning to reserve a spot later that same day. The tour was really interesting, we learned about the entire process behind printing money and got to see some of the production lines in action. And they told us some fun facts:

They didn’t allow us to take any photos on the tour, but afterwards in the giftshop, we got a couple photos showing how tall we are in $100 dollar bills – yes, even though I’m older, Kathryn is about 5 inches or $116,500 taller than me!

In all, it was a really interesting day… if you’re planning a trip to DC, don’t forget to try to fit in some non-museum attractions!