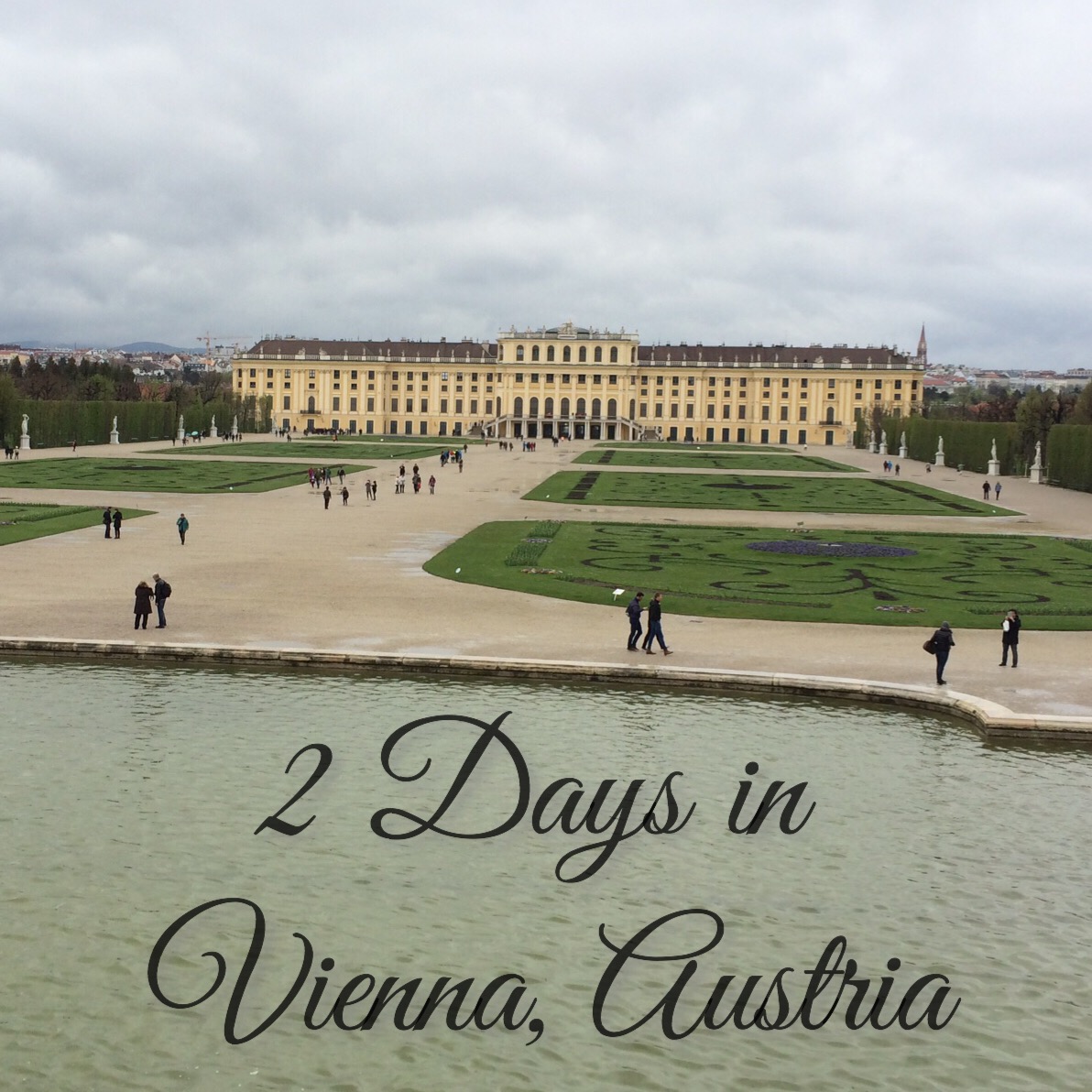 On our Eurotrip this spring, we spent two days in Vienna! From Zagreb, Croatia, we took the early train (and the only one of the day) arriving in the afternoon and headed to our hotel first. We stayed along the Danube river, a little ways out of the city center but right on the metro, the U, which worked out really nicely as Vienna had one of the best public transit systems I’ve seen! So after getting settled in, we bought 72-hour U passes and headed to the Ring, the nickname for Vienna’s city center.

Coming out of the U once we arrived, we walked right up into St. Stephen’s square facing the cathedral! After taking a quick look inside the church, our first order of business was finding the Vienna Tourist Office, just a couple blocks away. We stopped in to pick up some brochures and a map, and ask some questions of the helpful staff, and then headed across the street to Mozart’s café for drinks and dessert and to figure out our game plan for the next couple of days. Then, tired from traveling all day we called it a night and headed back to our hotel. 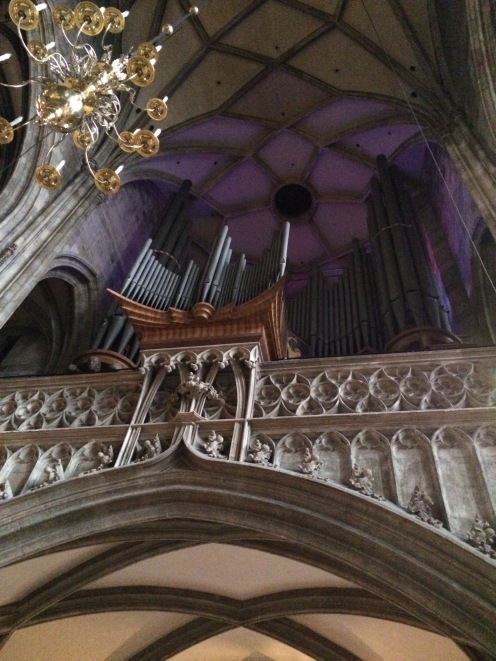 I’ve already written about some of the palaces we visited and some musical must-sees we did, here’s how we fit it all (and more!) into two days in the city!

After breakfast at our hotel, we headed into the Ring and started our day at the morning exercises at the Spanish Riding School, watching the horses and their riders during their daily training session.

Then we went right across the square to the Hofburg Palace, the winter palace of the Habsburgs, the Austrian royal family until the early 1900s. We spent a couple hours doing an audio guided tour through the imperial apartments and the Sisi Museum, a whole exhibit focused on Empress Elisabeth, who was married to Franz Joseph, the longest reigning emperor of Austria. More on the Hofburg in this post about Vienna’s palaces!

When we left the Hofburg palace, it had started to rain, so we hurried to the next thing on our agenda, a hop-on-hop-off bus. We took the route that went around the Ring. I usually really like hop-on-hop-off buses but this one did not have near as much commentary as I usually like. But at least it got us out of the rain for a little bit!

It was mid-afternoon by the time we had ridden the bus around the whole city center loop, so we got off at the Vienna State Opera building, just in time for the 3pm tour!

After the tour, we headed to dinner at a Vienna wine garden! We went out of the city to the suburb of Grinzing, just a U-ride and bus-ride away (both included in our 72-hour pass), and got dinner at a wine garden called Muellers Heuriger. In addition to trying a couple of wines, we had a buffet dinner of pork, dumplings, goulash, quiche and bread with a couple different spreads. But it wasn’t an all-you-can-eat buffet like we’re used to – it was mix-and-match but you still paid for each portion individually. The Austrian way is to order family style, so that’s what we did so we could all try a bunch of different foods! After dinner at Muellers, we got dessert and another glass of wine at another wine garden down the street, Rudolfshof, before heading back to our hotel for the night.

On our second morning, we got up bright and early to try to beat the crowds and get to the Schonbronn Palace right when it opened! We spent the morning touring the summer palace of the Habsburgs (another great audio tour!) and then wandered around the gardens.

Then we took the hop-on-hop-off bus back into the city center (we had gotten 2-day passes). We wanted to take a walking tour but had a couple hours before it started so we explored the Ring for a while. We found Mozart’s apartment, saw the church where the Habsburgs’ bodies are buried, and got coffee and cake at a shop called Aida.

Next was the walking tour that came with the hop-on-hop-off ticket, making up for the not-so-great audio on the bus, the walking tour was great! It started at the opera building and went all around the Ring, past more of the buildings with the Hofburg palace, along the high-end shops on the coal market street, and by the plague fountain that was built as a memorial for the plague epidemic in the 1670s. 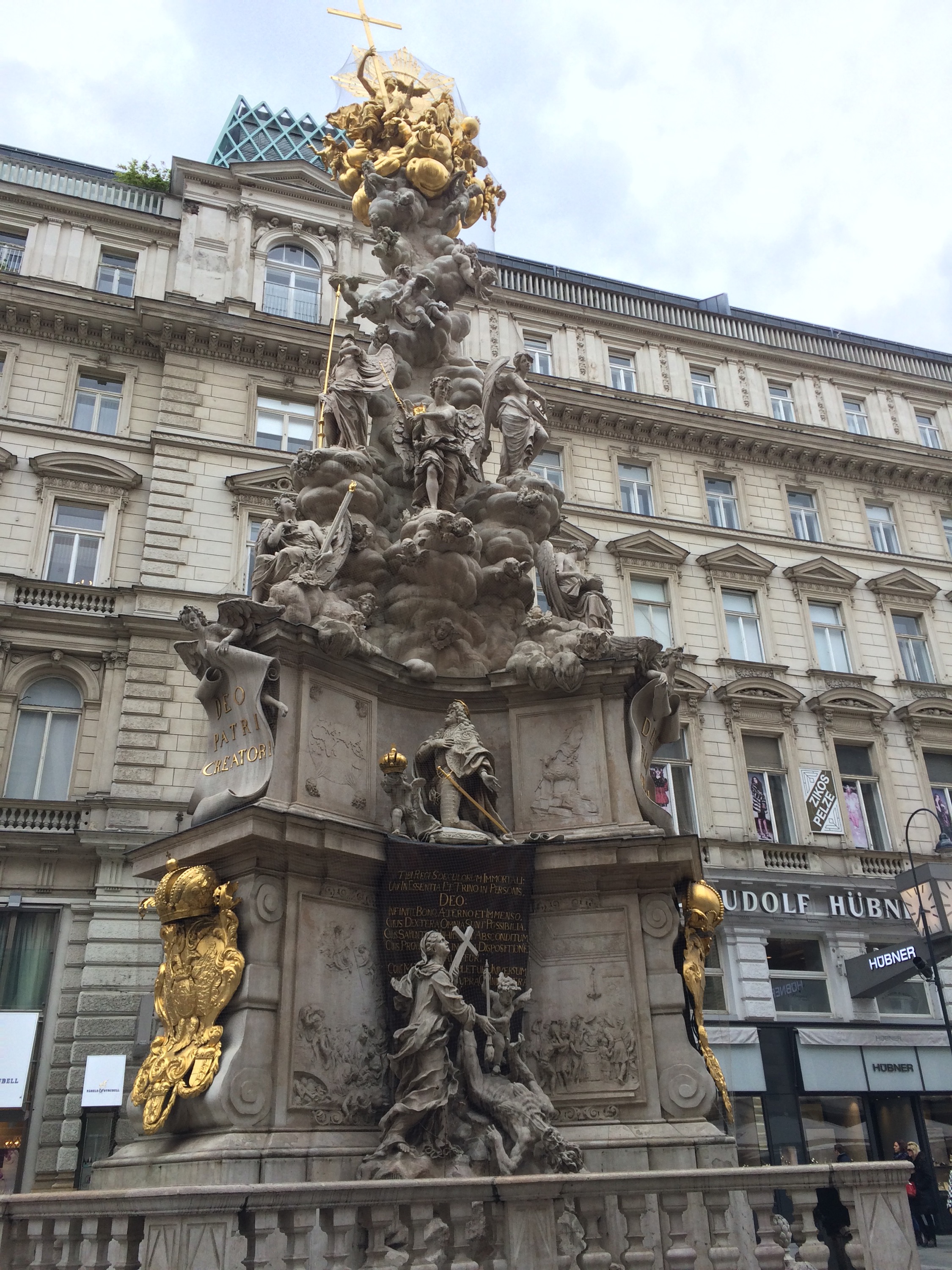 After the walking tour, we went back to our hotel to get ready and then headed to dinner at Figmueller in the Ring – had to get our schnitzel while in Vienna!

Then we went to a concert at the Vienna Kursalon featuring an orchestra playing music from Strauss and Mozart, accompanied by ballet dancers and opera singers. We had bought tickets outside of St. Stephen’s Cathedral on our first night, so we weren’t sure what to expect, but we really enjoyed it, more on the concert in this post! 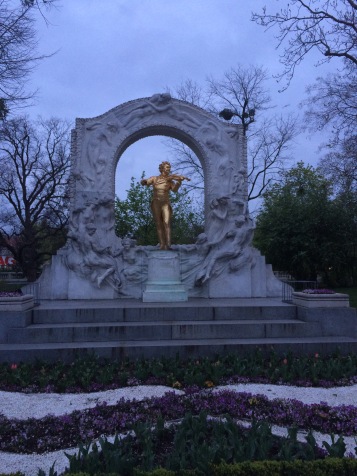 After the concert, wanting to check out the nightlife in Vienna, we found the Bermuda Triangle – an area in the city center with a bunch of bars that was definitely hopping on Saturday night!

And that wrapped up our two days in Vienna!